Often, persons who go through an estrogenic puberty tend to store fat in regions of the body such as the hips, buttocks, and thighs. Sometimes, trans women and nonbinary and gender diverse trans folks who underwent an androgenic (testosterone-dominant) puberty may experience discomfort or gender dysphoria or incongruence related to their body fat distribution.  It’s possible to reduce these feelings of dysphoria or incongruence through a variety of surgical and lifestyle choices. However, there are limitations which we’ll cover below.

The Difference Between Androgenic and Estrogenic Body Forms

The pubertal development someone undergoes generally determines the bone structure they will have as an adult. Alterations in the bony framework are unlikely with hormone therapy, and surgical modification of the pelvis comes with significant risks that outweigh the benefits, based on current surgical techniques. 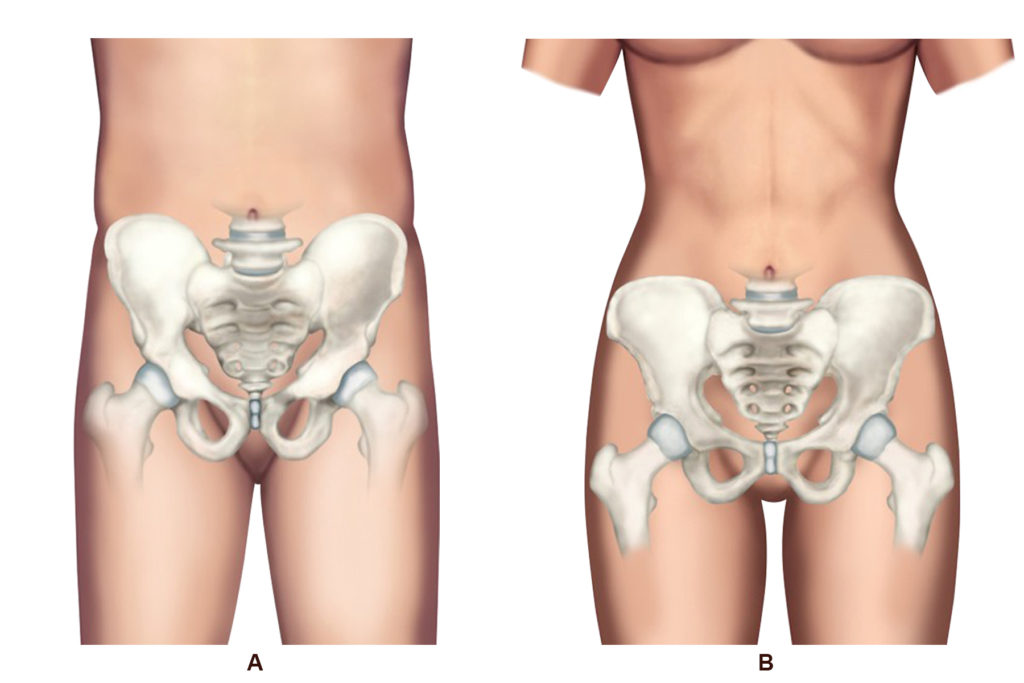 The Effect of Hormone Therapy on Body Physique

It has long been assumed that the hormone estrogen was largely responsible for the difference in fat distribution. While every body produces estrogen, levels tend to be significantly higher in people who have ovaries . As a result, this group of people   tend to develop breasts and are more prone to store subcutaneous fat around the hips and thighs. People who do not have ovaries  tend to produce far less estrogen.

In order to reduce the physiologic changes that occur during and after puberty, trans women and nonbinary  people  may take estrogen or estradiol. This hormone helps to achieve  breast development, altered fat distribution, softening skin and altering mood. Patients may also take testosterone blockers such as spironolactone, gonadotropin-releasing hormone agonists, leuprolide, finasteride, and progesterone.

Although our surgeons don’t  require anyone to be on hormone replacement therapy (HRT) for gender-focused body contouring or breast augmentation , being on estrogen for a year prior may have a positive effect on fat distribution and gluteal shape. As you can see in the above figures, gluteal forms differ. What may be viewed as a conventionally “masculine”  gluteal form tends to have a flatness or concavity at the mid-lateral buttock, and a relative absence of lateral hip fullness. A smooth inward sweep of the waist and lower back are characteristic of a conventionally more “feminine” form. Therefore, approaches in body contouring for trans women and nonbinary people  aim at increasing the fatty tissue in the gluteal region to highlight a distinct transition from the lower back.

Lowering the waistline through trunk liposuction in the abdominal and flank regions can have a significant impact on the fit of  clothing generally made for women, which tends to accentuate the waist.

Every body is unique, and here are four examples of conventionally “feminine”  body types. Use these images to help guide your decision making around your gender-focused  body contour goals. Schedule a consultation with us so we can learn more about your body contouring goals.

Pear-shaped bodies describe folks who have a hip measurement that is greater than their bust. While fat distribution varies, pear-shaped people  are more likely to carry weight in the hips, buttocks and thighs than in the upper body.

Banana-shaped bodies often possess a very even distribution of fat among their waist, buttocks, chest and face, and have a banana or rectangular shape.

Apple-shaped bodies often have shoulders that are comparably broader than their hips. They can possess larger busts, a less defined waist, and thin hips and thighs. Fat is mainly distributed in the face, chest and abdomen.

An hourglass shape describes a body type with fat that is distributed equally between the upper and lower body, paired with a very narrow waist.