A person’s general body shape is largely defined by their skeletal frame, as well as their distribution of muscle and fat.  Some people who undergo an estrogenic puberty  tend to have more curves and a smaller stature, so many trans men and nonbinary transmasculine people desire surgery  to change  these traits. Though it’s possible to attain a different  body type through various surgical and lifestyle changes, it’s important to understand the statistical differences between someone who has undergone a full estrogenic development (estrogen-dominant puberty) and someone who has gone through a full androgenic development (testosterone-dominant puberty) in order to formulate realistic goals for your own body .

Figure B is of an adult who experienced an estrogenic development, figure A is of an adult who went through an androgenic development. You can see that the bone structure of figure A is narrow. Hormone replacement therapy such as testosterone can’t change the bone structure of the body, and the currently available options to change the pelvis have risks significant enough as to make them untenable. Therefore, a viable way to change the shape of the body is through gender-focused body contouring of the overlying soft tissues (fat), namely with liposuction and possibly fat grafting as well. Our surgeons  don’t require patients to be on hormones in order to undergo  top surgery or gender-focused body contouring. However, being on testosterone for a year prior to body contouring may help your outcome , as this would allow some natural fat redistribution to occur. Though it is important to know that for some people, the full effects of fat redistribution from testosterone can take much longer than one year. It’s also important to note that the bony structure of the pelvis as featured in figure B is unlikely to be affected by testosterone, and gender-focused body contouring is attributed to the removal or redistribution of fat and does not relate to altering of the bony  structure.

Testosterone and the Distribution of Fat and Muscle

During puberty, the production of hormones increases, which usually causes rapid physical changes to  occur. This results in the development of secondary sexual characteristics that society labels as masculine or feminine.

Testosterone is produced by everybody at different rates. These differing rates are responsible for many physical differences between estrogenic and androgenic development. People who are born with testicles  can produce as much as 10 times the testosterone of the average person who is born with ovaries .

Hormone replacement therapy (HRT) for testosterone can help create  broader shoulders, an expanded chest, increased muscle mass, increased bone mass, thicker skin, more angular eyes and face, deepening of the voice, facial and body hair growth, etc. Despite the positive effects of hormone therapy, changes in body fat redistribution caused by HRT can sometimes not be enough to combat feelings of gender dysphoria or gender incongruence. This is why many of our  patients have chosen to move forward with gender-focused body contouring.

Below you’ll see that the androgenic body form featured in figure C has a concave/flat appearance. Body contouring of the gluteal region would aim to remove the fullness of figure D so they have an appearance more like figure C. The  waistline of people who went through an androgenic puberty is significantly higher than those who went through an estrogenic puberty . Lifting the waistline through liposuction of these areas can have a significant positive impact on the fit of male  clothing. When done appropriately, contouring will decrease the hourglass silhouette featured in figure A so that the body looks more like figure B. 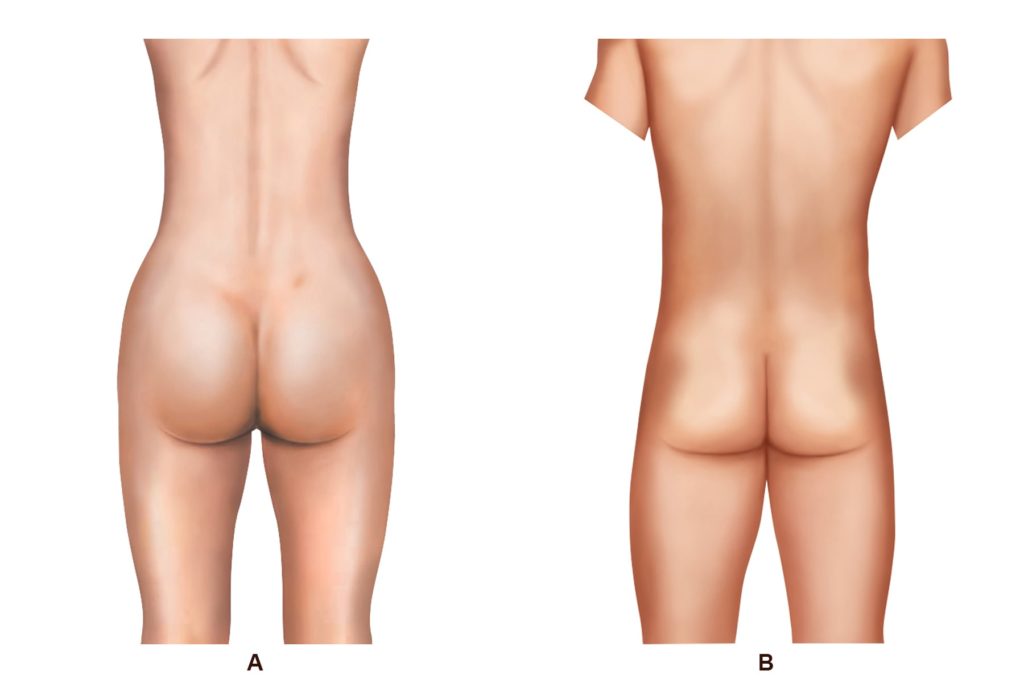 While no two shapes or figures are ever the same, most conventionally “male”  body types can placed into one of the three categories below. Use these shapes to help guide your decision-making around body contouring. If you’d like, schedule a consultation with us so we can learn more about your gender-affirming body contouring goals.

V-shaped folks can easily shift from being incredibly lean or very muscular. They tend to have very broad shoulders, a narrow waist and narrow hips. When V-shaped people gain weight, it tends to be around the abdomen, but it can also occur on the buttocks.

People with apple-shaped bodies tend to be shorter and rounder than those in the other body types. They carry much of their weight around their abdomen, calves and ankles.

People  with a rectangular frame usually appear very muscular. They are prone to rounded, protruding chests and rectangular torsos, as well as thicker arms, thighs and calves. Rectangular-shaped body types sometimes carry weight in the hips, buttocks, upper back and stomach.